One of the most annoying things you can hear as a Type One Diabetic is when people say “Oooh, I couldn’t possibly inject myself every day, I can’t stand needles”. The answer is pretty obvious and invariably said through gritted teeth: “Errm, I think you could if the alternative was death”.

Needles and pins-ah. It’s part of life with diabetes, and to those of us who have that dubious pleasure, jabbing sharp bits of metal into our fingers, tummies, thighs and bums is all part of the fun. I don’t like needles  - does anyone? - and despite the fact that I inject myself four times daily and often far more than that (more of that later...), I still don’t like ordinary injections. I look the other way when I have blood taken from a vein and the idea of injecting into a vein, as drug users choose to do, still makes me shudder. But yes, finger prick tests and insulin pen injections are just part of my world. I calculate that I’ve done towards 30000 injections in my 19+ years with diabetes, so to say it’s no big deal is a fair assessment of my attitude.


I’ve been thinking about injections quite a lot recently – not that they can ever go that far from my thoughts. Until I started interacting with other people with Type One, thanks to the #gbdoc a few years ago, I just took it for granted that injecting insulin was the norm for me. I was vaguely aware of the existence of pump therapy, but knew nothing about it, didn’t know anybody who used a pump and assumed - without being told so – that pumps were not for people like me. I certainly heard no mention of a pump from my healthcare team, although to be honest I didn’t hear much from them at all. I was a “good” patient with “good” control, so was just left to get on with it.

However, once I started to talk to and meet others living with diabetes my eyes were opened to how things could perhaps be different. The fact that a disproportionate number of my “diabuddies” are younger than me probably warped the statistics a bit, but suddenly it seemed as if everybody else was either on a pump or trying to get one. I spent a weekend in Stockholm in June last year with a group of Type Ones from all over Europe and felt quite the dia-luddite in a group of pumpers, watching in wonder as my friends discreetly tweaked controls, checked numbers and changed cannulas. Conversations - real life and online - often suggest that being on a pump is easier and better, allowing the user more accurately to replicate the response of a working pancreas.

And yet.......I am absolutely fine. I’ve lived with Type One for all these years armed only with a couple of pens and a “guesstimating” method of calculating (no, I’ve never been taught to carb count, and never been offered a DAFNE course), and I seem to have coped pretty well. I started to look a bit more carefully at what my fellow Type Ones do and realised that if I watch and listen, pumps aren’t quite as ubiquitous as I thought.

A few days ago, I was enjoying one of those wonderful occasions which many of us have enjoyed in recent times, meeting with a group of fellow diabetics. We were in Manchester for a meet up and meal based around the Diabetes UK Professional Conference. I was sitting next to my friend Emma, an outspoken, strong-minded and witty member of the #gbdoc and was enjoying finding her such a good match in the flesh to her feisty online persona. But I couldn’t help noticing that she injected herself several times during and even after our pizza meal. We were so busy chatting about other more interesting stuff that I never got round to asking her about her injection strategy.

For a start it was quite refreshing to see a young woman injecting and not pumping. Recent experience had suggested to me that virtually all Type Ones, especially the younger ones, were on pumps. But more striking for me was that Emma was apparently micro-managing her insulin with follow-up injections - just like I have recently started to do. (By the way, I have subsequently spoken with her on Twitter about her use of MDI, and got her permission to mention her in this post)

I’ve certainly started doing things that way, entirely off my own initiative, over the past year or so. I’ve even given it a name: MDMI – multiple daily mini injections. The additional M for mini is for the extra ones I add if the main pre-meal bolus hasn’t been enough.

There’s a lot of Ms, Ds and Is in my life: Multiple Daily Injections for my diabetes, then in my working life as a university entrance advisor I know all about Multiple Mini Interviews, the increasingly common method of assessing students applying to Medicine and Dentistry courses at university. Candidates are subjected to a succession of interview “stations”, each one addressing a different aspect of the many qualities required of a good doctor or dentist. It’s like speed-dating, but deadly serious. So with MDI in my day-to-day life and MMI in my professional life, a new label of MDMI came to my mind.

So is MDMI a good alternative to pump therapy? Is it any better than MDI, or basal-bolus as it’s sometimes known, with its more vigorous and unvarying approach to dosage and timing? Well, all I can say is that I like it, and it works for me. I honestly can’t believe that a pump is worth the bother. I see people fretting about where to keep the pump, set changes, basal testing, TBRs and other hassles. For me, a quick jab with a pen seems less faff. In between injections, there’s nothing attached to me, no dangling tubes, no air bubbles.

Adding the extra 'M', the mini correction doses, is a recent refinement that for me seals the deal of preference for MDI. I inject conservatively before eating, then top up an hour or so afterwards if needed. Using this strategy, my average glucose level has fallen, my percentage time in target has increased and my estimated hBa1c is continuing to fall. How do you know, I hear you ask?

Well if you know me, you’ll see the answer coming a mile off. I’m a known fan of the FreeStyle Libre flash glucose monitoring system, and I have to say that it’s because of the easily accessible knowledge of what my BG reading is and where it’s heading that I can micro-manage my insulin so effectively. I’m very aware that having this knowledge costs me about £100 a month, and that I am lucky that I can (just about) afford it. If I have one wish for my fellow diabetics it’s that the NHS recognise how effective the Libre can be in giving patients the information they need in order to manage their condition more effectively, and allow it to be available on prescription.

Meanwhile, it’s Needles and Pins for me, not Pump it Up. Click on the links to hear the songs.

But one final thought: PLEASE don't think I'm having a go at pumpers. Many of the wonderful friends I've made through the #gbdoc are enthusiastic and experienced pump users, and I have watched  in admiration as others have started out on the challenging journey of pump use. As with so much else in life, it's a matter of taste, choice and circumstances. We are each entitled to treat this challenging condition in the way that suits us best.

Disclaimer: Please note that this post represents the musings of an unqualified patient, not a healthcare professional. Just because an insulin regime works for me doesn’t mean it is right or will work for others. Insulin is what keeps us alive, but can also be very dangerous if taken in the wrong dosage and/or at the wrong time. If in doubt, consult your healthcare team before making changes to your regime.

A quick and time-sensitive post, which I hope will serve to inform, reassure and possibly even persuade. It's all about testing for Covi... 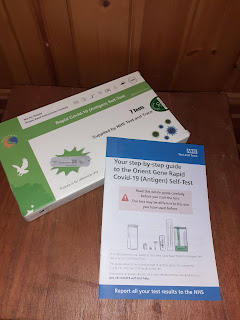