My enthusiasm for the FreeStyleLibre flash glucose monitoring system is well known amongst the online diabetic community. As soon as I became aware of its existence in early 2015 (thanks entirely, it must be said, to the #gbdoc, and no thanks to any input from healthcare professionals), I immediately saw that here was a potentially massive leap forward in our ability to regulate our blood sugar levels more responsively, tightly and safely than had been possible with traditional fingerprick testing.

I have already enthused about the device in this post written soon after I started using it, moaned about the fact that I have to pay for it in this post and featured in this film made for Abbott about a busy day in my life, and how the Libre helps me to manage my condition on even the busiest of days. I even found myself travelling to Stockholm in Sweden at the start of June this year, to attend a diabetic bloggers' conference with other Libre users from around Europe. I should at this point pause to say that Abbott financed this trip for me and all the others, but with no requirement to praise the device in return. My love of the FreeStyleLibre is entirely voluntary.

I have now had the opportunity to try out the next phase in its development, namely the use of LibreLink a mobile 'phone app which allows users to replace the small scanning device which has hitherto been the partner of the sensor with their own mobile phone.

My impressions are basically very positive. LibreLink means no need to carry a scanner around. The scanner (the size of a small pre-smartphone mobile) had become another device to fret about in terms of where you keep it, how often to charge it, and how to avoid losing or damaging it - it was, in effect, like having a second mobile. 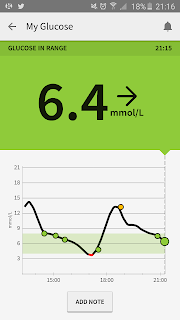 More importantly, it gives far more detail and clarity thanks to the use of a full-colour smartphone screen, and far more data thanks to the smartphone's processing power. For example, it turns green for in range and amber for out - there's also a red, but fortunately  I haven't seen much of it yet! In effect, it gives the more detailed data that previously had to be downloaded from the scanner onto a laptop or PC, notably providing a constantly updated estimated Hba1c reading. It can also be used to link with Diasend enabling the sharing of data with others, notably a healthcare team (although my own team are light years away from this sort of thing - another story altogether)

The only disadvantages I can see are minor, outweighed by the benefits, and not the fault of the app: firstly, it does rely on the quality of the phone's NFC capability, and with mine this requires a slower and more careful swipe than is needed for the FreestyleLibre scanner. Not a problem once you get used to it, and I suspect that NFC capability will advance in future phones. Secondly, of course, it depends on the phone having a battery charge, and as we all know, smartphones can drain quickly, so if you've been out and about and using the phone a lot, you might find it running out just when you need it (as far as I can tell, the app itself uses very little charge, so it will happily run on a very low battery). Thirdly, it is only available for Android phones at the moment - but that's because other platforms - notably Apple - won't allow it yet! 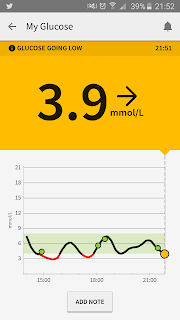 The first two of these drawbacks lead me to another point that is a bit fiddly but important: you can still use both the LibreLink and the scanner but they both need to be activated within 60 minutes. This means sensor first, then phone. You then have to be sure to use each one at least every 8 hours or there is a gap in data on one or the other. Both devices show identical readings in my experience so far, which is good to know.

I have found that I use the scanner at night - it's faster and quicker, and you don't have to "wake up" your phone.

Otherwise, that's it! Clearly a great advance, clearly the future, in that we are all addicted to our phones so might as well use them for monitoring as well. And like the Libre with scanner, I find people are really wowed by it, and I enjoy showing it off. Libs herself (the scanner) has just become a sort of techie teddy bear whom I keep by my bedside.

I must once again applaud Abbott for their innovation in blood glucose monitoring. It is very hard to imagine "life before Libs", and I only hope that in the near future the NHS will realise how much this device can contribute to the long and short term well being of diabetics - and save themselves some long-term cash!!
at July 15, 2016 No comments:

Here is the text of a speech that I delivered on Sunday 10th July in Bad Bruckenau, Germany, to the gathering of people from three small towns in Europe who enjoy warm relationships through an unusual three-way twinning arrangement. I am Chairman of the Kirkham Twinning Association, which oversees our link with the French and German twin towns.

I make no apologies for the strongly partisan pro-European tone.

It is with great pleasure and some embarrassment that we British meet you here today in the heart of Europe, as a temporary escape from our bruised and deeply divided country.

Town twinning is a powerful symbolic representation of the unified Europe that had been so painstakingly built in the wake of centuries of conflict and suffering, and the triangular relationship between three small towns such as ours is a living expression of our friendship and of our shared cultural, social and political values.

Those who dismiss the European project as the unwanted and irrelevant creation of bureaucrats and politicians would do well to witness the yearly gatherings of our three communities and the friendship and cooperation that drives it. I am always very proud of the fact that those from all three communities who take part in our twinning events are not politicians or business people seeking personal gain from their involvement, but just ordinary citizens who enjoy meeting people of a different nationality but a shared cultural, linguistic and political heritage.

The lasting friendships and connections between our three communities stand as living proof of the true values of international cooperation and understanding which are so tragically lacking in many other parts of our world, and it is to many of us in the United Kingdom nothing short of a tragedy that the selfish and divisive voices of the so-called Brexiteers prevailed in our recent referendum.

I wish to take this opportunity to reaffirm the commitment of many millions of us in Britain to the maintenance and strengthening of our European links, not least among those of us who derive so much pleasure from our twinning links with the wonderful towns of Bad Brückenau and Ancenis. I was somewhat comforted by the fact that the younger generation were 75% in favour of remaining in the EU, and therefore that the small-minded mentality which has driven the success of the Brexiteers is, perhaps, on the way out.

May I thank our friends in Bad Brückenau for the hospitality and entertainment that we have enjoyed this weekend and conclude by warmly inviting the people of the two towns to join us in Kirkham in 2017. You can be assured of a warm welcome - and you will not need a visa!

May we continue to enjoy the differences between our countries, but more importantly to celebrate what unites us. Long live twinning, long live Europe!" 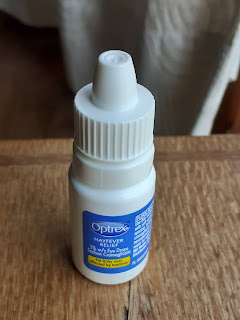